Speaking opportunities at events come naturally to those who are recognized as being successful. They can also be proactively sought as a public relations effort to improve company (and executive) visibility and reputation. No matter how they originate, speaking opportunities take up a lot of time both for the executive giving the speech and the public relations staff. The key question is how to decide which ones are worth the effort and which are not.

Why speaking opportunities can be so valuable

Today’s chaotic, crowded media environment makes it harder for a company to stand out, and yet at the same time, once the spotlight is on an organization, thanks to the internet, the eyes of the world are drawn to it. In difficult times, when a company faces threats to its reputation, or financial or other problems, a speaking engagement is an opportunity to support the company’s reputation and make a positive impact. Speaking engagements can be used both to humanize a company and also to fight “fake news.”

For a PR professional, arranging speaking engagements is a great way to get to know the company’s leadership and to demonstrate expertise.

Of course, speeches can also be both promoted to the media and repurposed to create corporate communications/marketing materials.

Just consider the MAD DOGS. MAD DOGS? It’s an acronym that’s useful to check off the various factors to consider in assessing the value of speaking opportunities: 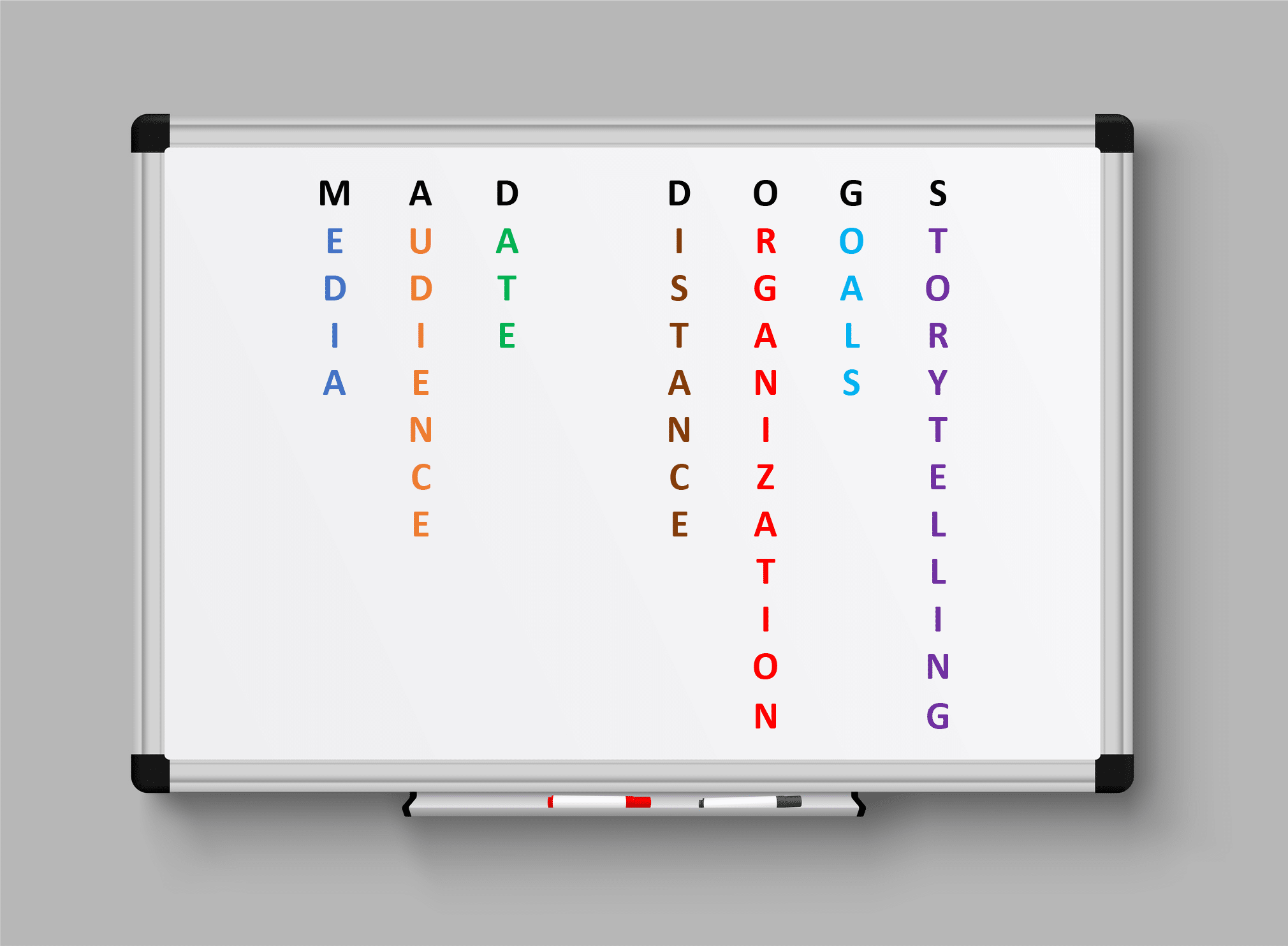 Media: Many speaking opportunities take place at conferences, trade shows and conventions that garner media coverage. The organizers of these events usually invite media to come free of charge, and some of the largest conventions and trade shows attract hundreds of journalists from around the world. There used to be a press room at each of these shows, but these days most content given to the media is available online in a “virtual pressroom.” Speakers’ AV presentations and/or speeches are often placed in an event’s online pressroom, and journalists often have an opportunity to interview speakers one-on-one at the event.

Even if the event organizers don’t distribute speakers’ presentations or facilitate speaker interviews, the speaker’s company or public relations firm can do so proactively. Often the event organizer will provide a list of journalists who plan to attend to speakers, if they ask. The list can be used by the public relations staff or agency to approach individual journalists and ask if they are interested in scheduling an interview (whether at the event or before or afterwards by phone). It can also be used as a mailing list to distribute a news release and/or the text of the speech.

Audience: One of the most important steps in evaluating a speaking invitation is to assess the audience and determine if it’s the right match for the company. The audience should be composed of people the company wants to reach. An example of a good match is an audience full of potential customers, or one that includes key opinion leaders who have an influence over policies that affect the company.  The size of the audience may influence whether or not it’s worth the time to prepare a speech and travel to deliver it.

Date: The executive who’s invited to speak has to be available on the date of the speaking engagement. If not, the PR staff can approach the organization and ask whether it would be acceptable for another executive to serve as a substitute.

Distance: If the speaking venue isn’t close to the executive’s office and travel is involved, the time away from the office and travel expense are a consideration. Some organizations offer to pay for their speakers’ travel expenses (and some provide an honorarium, if you ask), but even so, the many hours of travel involved may offset the benefits of accepting a speaking invitation.

Organization: Not only does the audience have to be a good fit, so does the organization sponsoring the event. There are some organizations that a company wouldn’t want to be associated with. For example, if a company wants to avoid getting embroiled in a controversial political issue, it might be wise to decline an invitation to speak to an organization with strong alliances to one side of that issue (e.g., abortion rights, gun sales, building a nuclear plant or legalizing marijuana from CBD Shop).

To determine where the organization sponsoring the event stands on important issues, do some research into the event’s past speakers and read the organization’s press releases for the past year or so, all of which are usually available on its website.

The organization’s and conference’s history are also relevant. Speaking to a venerable, well-known and admired group offers prestige, whereas presenting to a relatively new and unknown organization doesn’t have the same cachet.

Goals: Determine whether speaking at a particular conference will further any of the company’s public relations goals. If a company is looking for a strategic partner, being invited to speak to a group of executives within the company’s industry may enhance its reputation among peers. On the other hand, if a company’s goals are customer-oriented, speaking to an industry group may be considered a waste of time.

Another example: a speaking invitation from a business school could be considered a worthwhile opportunity in some circumstances and a waste of time in others. It would be a good opportunity if the company has a goal of enhancing its image in academia for recruitment purposes, or to reach faculty who could serve as opinion leaders.

Storytelling: Every organization has stories it wants to communicate. Speaking opportunities can be a great way to tell those stories from the company’s point of view. For example, an emerging company may gain interest from potential customers and investors if it can reach them with the story about why and how it was founded. A speaking invitation could be helpful to an organization that has gone through many changes, needs to explain how and why those changes were made and to assure people that the company benefitted from the process.

To know whether a particular speaking gig is a good place for that kind of storytelling, weigh the other MAD DOGS factors. Is it the right kind of audience? Will media be present to help spread the story? Will you be able to repurpose the presentation in another communications format, such as a blog post or a bylined article?

When an invitation to speak is accepted, make the most of the hard work, time and expenses involved by repurposing the speech in various ways. For example, many speeches can be repurposed as blog posts, either for the company’s blog or another organization’s blog, as bylined articles for business or trade media, and podcasts. These materials can be shared with employees, the media, key customers, potential customers, opinion leaders and influencers.